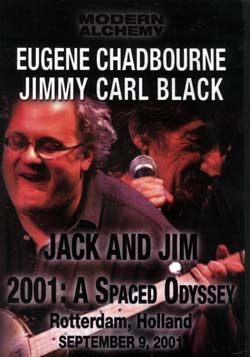 Dr. Chad has played with ex-Mother of Invention Jimmy Carl Black over many years, and the results are amazing modern hijinx versions of Zappa, Hendrix, Beefheart and songs from other rock and folk icons. This live show from 1992 in Yorkshire, 1992, captures a great mix of the aforementioned, along with songs from Merle Hagard, John Lee Hooker, and Willie Dixon. The music from an entirely different show from the same tour, Rotterdam 1992, is also included as a set of bonus mp3 files.

From the back cover:
"The good Doctor, also known as Jack, comments thusly on the release of this new DVD package:

I am delighted to see this important chapter of the Jack and Jim Show available as a film for families to watch at home: families of freaks, that is! The CD released from this 2001 tour is entitled 2001: A Spaced Oddity, and that is kind of what Jack and Jim and documentarian extraordinaire Bob O'Haire were as we wandered through Holland and France. The Rotterdamn show depicted heein was clearly the performance highlight of this particular venture, a perfect setting and crowd, a big plate of roast duck after the show, all what the Dutch would call "lekker!" We had made a new set with a clear Beefheart slant, which is an interesting contrast to the Zappa-rich set from 1992 which is included as an mp3 bonus. I was even more excited about this because this terrific live show from another first class venue was among the recordings I thought were lost forever due to the non-release of what would have been the Jack and Jim Show's first CD release. So this predates Locked in a Dutch Coffeeshop and features lots of songs we don't do anymore, makes me want to do them again. Sorry about the cheesy banjo sound but I hadn't given up playing with a pickup yet.