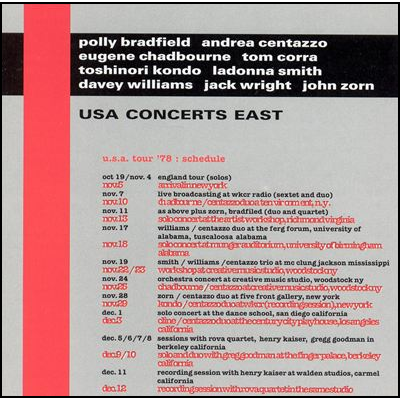 The CD contains tracks originally released in the LP "Usa Concerts" issued right after the first American tour of Centazzo in 1978 and three new tracks: one recorded in New York, at Zoo Place with Kondo e Chadbourne; a second in Woodstock in duo withTom Corra in 1980 and the third one in Bolgna (Italy) in 1985 with the Philadelphia sax player Jack Wright.

It was an homogeneous musical view the one that Centazzo found on the arrival in New York in 1978, rich of collaboration between musicians coming from different experiences but all sharing the same interest for the improvisation.

CENTAZZO writes in the linear notes of the CD: « It seems to me that during those years there was a definable new wave sweeping across the East coast music scene, united by a spirit of radicalism and a desire to seek out new sounds, a frenzy of exploration that marked a departure from the Afro-American influences which had dominated the 70s’ Free Jazz movement. In New York, concerts were happening in the most unlikely venues from the punk shrine that was CBGBs to the multimedia space of the Zoo up to avant-garde sanctuaries the likes of The Environment or The Kitchen. Meanwhile in the South the new music flag was being kept aloft by a group of artists working out of Birmingham, Alabama, who busied themselves organizing concerts and recording sessions and trading riffs with their more fortunate New York cousins. This East coast axis continued to flourish for several years before fading out into different local scenes somewhere around the mid 80s. This disc is therefore a kind of testimony to that golden age of new music, the way it was and was not to be again.

(the other recordings from the same session has been released on Environment for Sextet - rdc 5026), to Trios with Chadbourne and Kondo or LaDonna Smith and Davey Williams, and Duos with Chadbourne, Corra, Wright, Kondo, Williams and Smith.

The general atmosphere is of improvised music with European influences: very large freedom, total improvisation, amount of compositional sketches reduced to the minimum. Those years have been very seminal, deeply influencing the generation of musicians that has made the new jazz and improvised music in USA. With the time the rough language of improvised music will merge with other sounds starting a very creative season of music beyond borders. Let's think of John Zorn who mixes Ornette Coleman's compositions and James Bond's film themes, Klezmer and grind metal; or Eugene Chadbourne whose love for country and rockabilly pops out in any of his concerts and recordings; or Toshinori Kondo at home with jazz heroes as Wayne Shorter but also with Jungle masters as DJ Krush and Coldcut.

This CD, and more in general the entire Ictus catalogue, is an important memory of the origins of this generation and of a unique creative season.