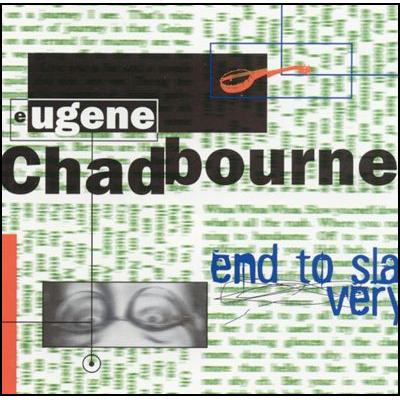 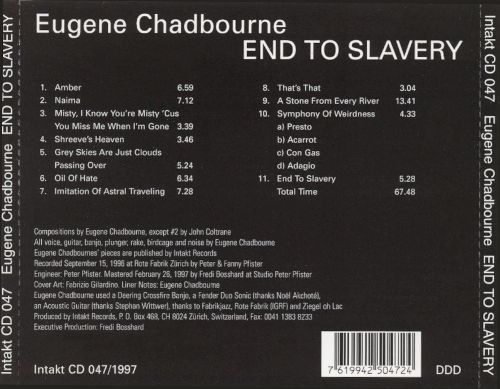 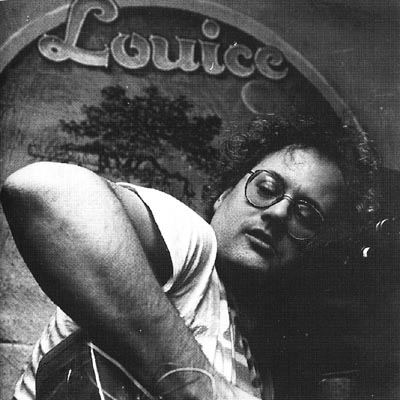 All compositions Eugene Chadbourne except "Naima" by John Coltrane. "These 'Ends to Slavery' Eugene Chadbourne refers to in his title are just that: the pieces he played to end his own cultural and musical slavery. To this end, in the liner notes, he discusses -- sometimes at length -- what happens in particular works, or, more interestingly, what they're about and who they're for. The opening track, "Amber," is about a family cocker spaniel who had to be gassed because of her age -- and the fact that she was too old to go draft-dodging with the guitarist during the Nixon era. He puts the blood for the crime firmly where it belongs -- on Nixon. More importantly, he also discusses his use of Albert Ayler's folk melodies in the creation of the work, and through those movements he creates a textural dimension and soul that Chadbourne rings out of the guitar. His cover of Coltrane's "Naima" is, without question, a stunningly beautiful and deeply felt rendition that reveals great technical skill and emotional depth. The other element here is how inventive Chadbourne can make humor sound, as he does on the four-part suite "Symphony for Weirdness" that occurs in just over four-and-a-half-minutes with scraped surfaces, feedback, pluck,s and plonks, rattling microphones, and even chewing food. It's funny, yes, but awesome, too. Let's not forget "Oil of Hate," with its hilarious lyrics (unsung), and multi-tracked guitars that walk somewhere between a Spanish folk song and the blues -- kind of like Loren Mazzacane Connors but with lots of movement and a varied emotional palette. In sum, it's all Chadbourne doing what he does best: everything. He's not only a technical genius on his instrument, he's a menace to cultural snobbery at every turn."
-Thom Jurek, AllMusic.com 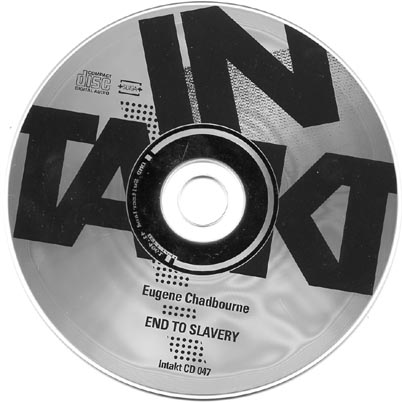