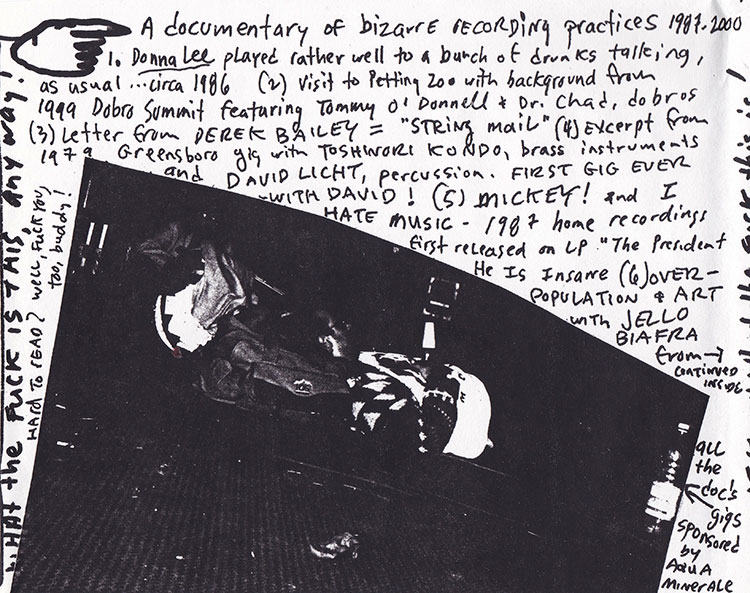 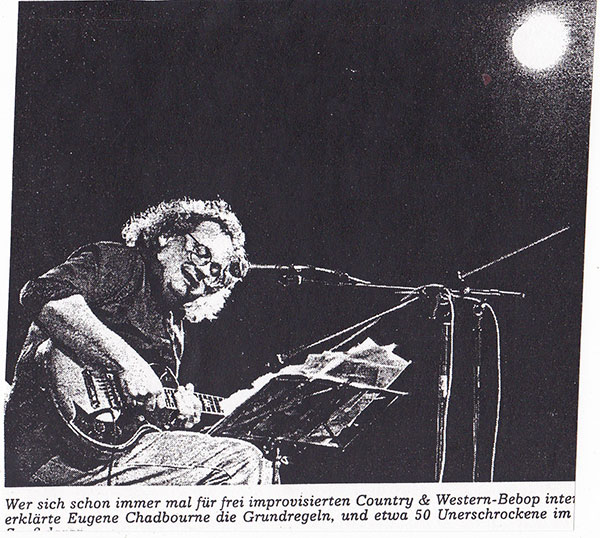 While there are plenty of unusual thing about this collection, strangest is that it is the second production under this name, the first one with an entirely different “lost” program was on cassette. To meet demand for “whatever the hell” was released on cassette, I released a CD-r version that bears no relation to the original other than the cover, title and how weird it is. Live, studio, radio and field recordings reflecting the enjoyable anarchy of the cassette scene. Cameos by Toshinori Kondo, Derek Bailey a/o.   ***

Fuck the Audio Evolution Network: A Documentary is one of those "mystery albums" Eugene Chadbourne likes to put out. The material spans two decades and comes from various recordings ranging from basement tape collages to crude live documents. Players surrounding the Doctor come and go, but include Toshinori Kondo, David Licht, Jello Biafra, and Bruce Ackley, among others. The CD booklet reproduces a letter from the "Audio Evolution Network" replying vividly to Chadbourne's refusal to give them tapes for some promotion. Less manic than The English Channel, this opus is also less exciting. The track list is not entirely accurate, but one can split the CD in two. First are the home experiments, including reworkings of a Derek Bailey music letter and recordings from a visit to a petting zoo laid on top of a dobro performance. Track five reaches the highest weirdness status, collaging excerpts of Toni Basil's hit, "Mickey," at different speeds with tons of other material. "I Hate Music" is an impersonation of Chadbourne's father revealing his musical interests (this cut was previously released on The President He Is Insane). The second half of the album concentrates on live material, first with the Golf Club (Licht and Shep the Hep), then the Chadbourne Baptist Church. Audiences are noisy, the performance jumping to all extremes. Bits of Monk and John Lee Hooker suddenly surface. "How Can You Kill Me, I'm Already Dead" provides a strong highlight, but otherwise Fuck the Audio Evolution Network is a mixed bag that will confuse the unsuspecting listener and only tickle the fan.