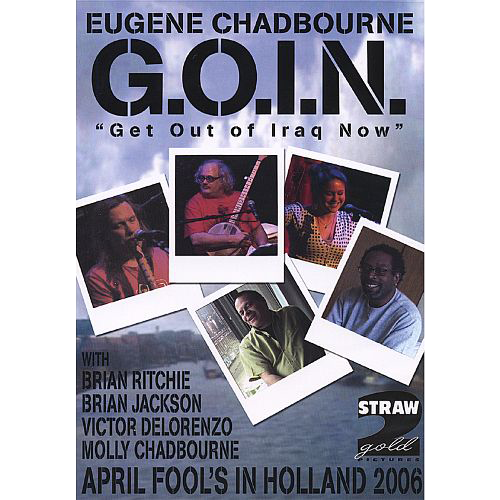 Chadbourne's "G.O.I.N." is an acronym for "Get out of Iraq Now." That said, the band plays a mixture of jazz & improvised pieces alongside protest songs, some pointed, some tongue-in-cheek, but all more focused on the music than the name might imply. The band is drawn from Chad's long involvement with Violent Femmes members Brian Ritchie and Victor DeLorenzo, joined on flute and piano by Brian Jackson, former Gil Scott-Heron collaborator. The DVD documents a complete concert of G.O.I.N. performing live at Bimhuis in Amsterdamn, March 2006.

Under Robert O'Haire's direction the excellent video footage is interspersed with statements from all of the artists involved, discussing the history of the band and the individual artists' contributions. The video focuses on the players rather than video technique, making an extremely watch-able concert. Pieces played include works by Albert Ayler, John Coltrane, Gil Scott-Heron, Gary Bartz, and Steve Lacy, as well as Chadbourne originals and traditional material. The interplay in the band is excellent, balancing the various styles using great subtlety and a relaxed sense of humor, with amusing dialog between numbers. The playing is uniformly excellent, Chadbourne's typically odd voice barbed on the political material, but relaxed and respectful on other vocal material, his guitar work is typically superb..

Brian Ritchie is featured on Shakuhachi for several numbers, lovely improvisations, particularly Steve Lacy's "Blues for Aida." Daughter Molly Chadbourne also sings a cover of "The Girl from Ipanema" updated to "The Girl from Al-Quaeda," a fun if slightly off-kilter vocal. Pianist Brian Jackson sings a tasteful rendition of "Pieces of a Man," a song that he cowrote with Gil Scott-Heron.

At 109 minutes the video is worth the price of admission, but Straw2Gold also fills out the release with the entire show in MP3 format. For an artists with innumerable releases, this is one of the finest Chadbourne packages available. - Squidco

The last track comes from the first G.O.I.N. gig ever, at the Fox River Jazz Festival in Wisconsin, summer of 2006. Everything else was recorded in Holland during our spring European tour, produced by Bob O'Haire