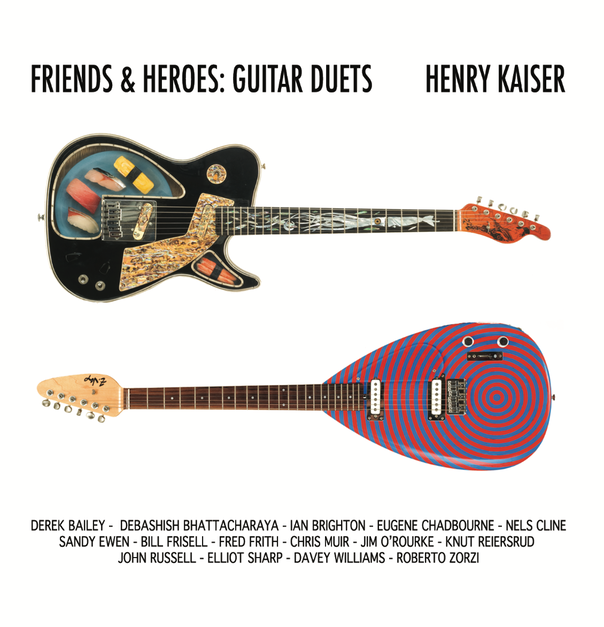 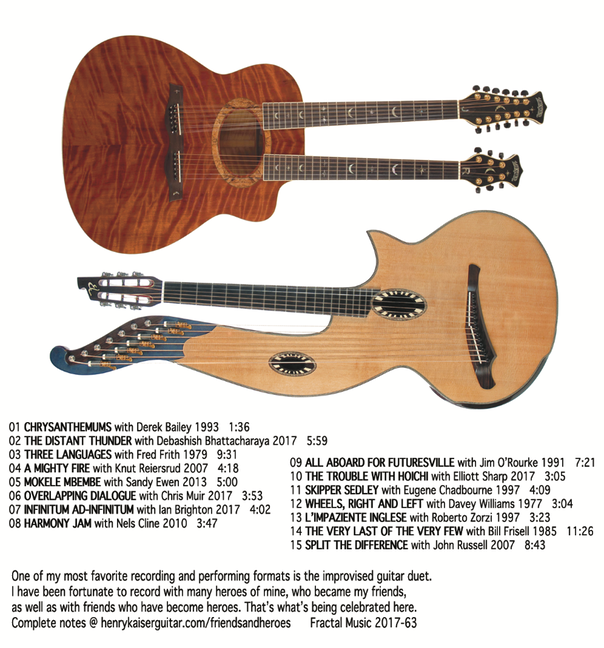 the two guitars on the front of the sleeve: Girlbrand SUSHI GIRL by Chris Larsen, and a Zvez DRIP guitar  painted by Jayson Myrold

on the back of the sleeve: an Allen Beardsell harp guitar, and a double neck 6/12 Moonstone by Steve Helgeson

on the CD face we have two Jersey Girl guitars from Japan: CAVERN & KALEXER

Derek is probably my most-listened-to and most beloved guitar hero.

We begin this album with a track from our WIRE FORKS album that was recorded by one of the greatest recording engineers: Kavi Alexander.

Derek and I are free improvising. He is playing my Monteleone Eclipse

and I am playing my Sobell Double-Decker. Hearing Derek is the primary reason that I started to play guitar in the first place, and he was one of the architects of the British Improvisation movement that is still my most favorite approach to music-making today.

The guru of Debashish Bhattacharaya is Brij Bhushan Kabra the truly amazing and first real Hindustani Classical slide guitarist. A student of Ali Akbar Khan, Kabra figured out how to play Hindustani music with the grace and subtlety of the sarod. Debashish has carried on with the pioneering experimentation of the guitar within this genre. I am such a big lover of Hindustani music that I am usually terrified by the prospect of collaborating with a master like Debashish. Especially in a duo context like this. But Debashish has been encouraging me for years to do some things together and this first attempt at recording together in 2017 gave us both confidence to be planning a couple of full albums together soon.

Debashish plays his Chaturangui guitar and I play a partscaster strat in the studio of Daniel Thomas, who kindly recorded this track and encouraged us in Santa Cruz, California. Debashish and I both thank Brij Bhushan Kabra, who we both met about the same time many decades ago. He is a hero to both of us and brought us both together with our individual stories that are too long to relate here.

Fred was also one of my original guitar improvisation heroes. We met and played together in Henry Cow a couple of years before this duet, which is the final piece on our classic WITH FRIENDS LIKE THESE album. This was always my favorite track on the album and it seemed kind of hidden at the end. I think Fred is percussively playing two guitars on a table, and I am playing one guitar on a table, plus what I recall to be a blue stratocaster around my neck. So we are playing 4 guitars in real time and this accounts for some of the instrumental density and the sonic diversity here; which goes beyond what one usually expects in a live duet.

My pal Knut is one of the most amazing guitarists in Norway, a country full of amazing guitarists. Knut combines what was originally a blues background with Norwegian roots music plus many world music influences from Africa to Iran. We met when he helped David Lindley and I record our SWEET SUNNY NORTH albums in Norway. This track, in a Muddy Waters groove, turns me loose with some live backwards blues noodling with my Michael Spalt Totem HA guitar as Knut provides simple but elegant backing. It was recorded in the living room of my house at the time by the excellent Steven Jarvis.

Sandy Ewen plays guitar horizontally in her lap. For my tastes she is the best lap/table guitarist since the original pioneering work in that genre by Keith Rowe and Fred Frith. Here, in this Texas studio recording from our album LAKE MONSTERS, she plays stereo with two volume pedals. And I play a 7-String Monteleone Radio Flyer acoustic with a gigantic sound. Together we invoke Africa’s most popular River Monster of the Congo River Basin. Like several other tracks here, we put two things together that you either have never heard together before, or that you might think could never work together.

Chris Muir is the person that I have played music with the longest. For well more than 40 years we have collaborated together. As I type this text now, my fingers are still warm from the 4 hour duet improvisation that we played at the Bay Area’s annual GARDEN OF MEMORY event. On this duet improvisation here we combine the current state of the art of both of our ideas of guitar timbre and also how each view and create music. Chris is the distorted guitar and I provide the way-too-many notes of clean guitar here. I will note that I think I might be basing my improvisation on the cadence of the OLD KING COLE nursery rhyme. I don’t really think rationally when I play, so this is just my best guess. True Temperament frets provide nearly just intonation here from my guitar, as they also do on the tracks with Debashish and Ian. My pedal of the year for 2016/2017, the MONTREAL ASSEMBLY COUNT TO FIVE, assists in the hyper-warp-speed clouds of notes from me.

Like myself Ian could be considered one of the early disciples of Derek Bailey guitar techniques. We both had our first albums released back in 1977. Today Ian seems to be surging back into concert and recording work, after dropping off my radar for a couple of decades. It is wonderful to have him back, and to see what we have both done with our own choices on the paths that Derek helped set us upon 40 years ago. This track was recorded by Samhain Carter-Brazier and myself.  Ian and I have already begun work on a duo album, as this test cruise presented here demonstrates.

Nels and I also go way back and have been friends and collaborators for 40 years. We don’t get to play together very often, but I always treasure our work together. This piece, an off-the-cuff bit of fun, was recorded during the video shoot for our ART OF THE STOMPBOX DVD that we made for the Museum of Making Music in Carlsbad, CA. Thanks to Carolyn Grant and Tatiana Sizonenko for making this possible back then. Recorded at Fantasy Studios in Berkeley.

Jim and I were introduced by Derek Bailey when he invited us both to play in a London Company Week, some months before this recording. At the time I was a hero of Jim’s and soon he became a hero of mine and we have been good friends since. I think this is the first piece that we recorded at a session in Chicago and we were both very surprised by the music that appeared that day. We are a good natural combination. It’s funny how something like that is just there with some people. Jim has moved to Japan now and does not leave that country; so I only see him when I visit there and it’s always the high point of those trips.

Elliott and I recorded this for this compilation. We also go back nearly 40 years. Elliott is playing an odd Wishnevsky mandocello-guitar doubleneck and I am playing the spectacular Beardsell harp guitar that is seen on the back of the sleeve for this CD. Elliott and I independently developed as players with many of the same interests and influences, but also developed very different styles and ideas from what had come before; so from the moment we met we were simultaneously friends and heroes in appreciation of each other. Elliott conjures up an image that descends from Lafadio Hearn and Masaki Kobayashi here. An image most usually sonically painted with the buzzing timbres of the Japanese Biwa.  For all these years: Elliott remains very East Coast, while I remain about as West Coast as anyone could be.

My first appearance on LP was thanks to Dr. Chadbourne on his GUITAR TRIOS LP. His earlier second album, VOL II, remains one of the greatest visionary inspirations of acoustic guitar playing for me. He is one of the great geniuses of acoustic guitar, as well as many other aspects of highly personal music. Looks like it has been 20 years since we worked together, going by the recording date on this track. As I type now, we are both preparing for an acoustic duet album of Wadada Leo Smith pieces to be recorded next week. 40 years ago we recorded a composition by Leo entitled WIND CRYSTALS for my ICE DEATH album on Eugene’s parachute label. Skipper Sedley was a Bay Area kids’ tv show host back in  the 1950s.

Direct from the Wayback Machine sent back to 1977, here I am with Davey, one of the greatest American practitioners of improvisation on the guitar. Folks may have forgotten nowadays that the great bluesman Johnny Shines took Davey under his wing and directly taught him the secrets and feelings for country blues; playing many blues gigs with him. Blues’ roots are ALWAYS important to both Davey and I, and you can hear them seeping out the seams here as both our guitar explode with youthful exuberance.  Davey was also the original first and greatest practitioner of playing guitar with various, unusual implements, for both sonic and surrealistic effects.

I was a hero of Roberto when he brought me and Sonny Sharrock over to play duo at the Verona Jazz Festival in Italy many years ago. I recall how Sonny and I quickly emptied the audience in a gorgeous Roman Amphitheater, after we followed the Modern Jazz Quartet in an evening concert on a lovely summer night. Roberto is one of the closest and most-understanding students-from-afar of some things that he noticed me developing on the guitar. And he got so creative that he moved from the friend to the friend & hero category for me. About the same time that he moved me from hero to friend & hero. Here we invoke something to do with Zoot Horn Rollo vs. Cecil Taylor, along with some early attempts a Malagasy rhythms in improv from me. This track comes from our one duet album.

In days ancient Bill and I got to play together more often and I miss that.

This was recorded live at a well-attended duet show at the Great American Music Hall in San Francisco. You just don’t see this kinda music in large and popular venues much anymore. Bill is a gigantic hero of mine. He knows so much about guitar and about jazz that I could never even begin to understand. As you may hear here, we do fit together exceedingly well, when it comes to the weird stuff.

John and I were both inspired and encouraged by Derek Bailey. John and I have rarely been in the same room and have only had a few chances to play together (most notably on an unreleased trio session with the late and amazing Lol Coxhill). But we can both instantly speak the same language together, when handed two guitars in a room. Here, in this live concert improvisation from 10 years ago in London, we demonstrate together what two dudes, who both have studied and expanded upon what Derek handed to us, can do with two acoustic guitars. For me it seems like a set of super power that our hero Derek bestowed upon us years ago. Thus connecting back to the first track on this album.

Many thanks to all of my partners on this album. I am so gratefully to all of you for your music that I have enjoyed as listener for countless hours. My deepest gratitude and appreciation goes out to you folks for joining forces with me in the duet improvisations presented here and the other musical adventures and explorations that we have shared together over the past 40 years.