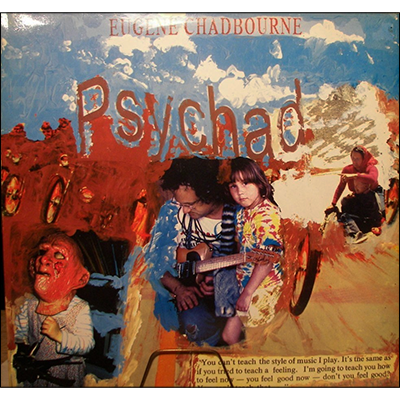 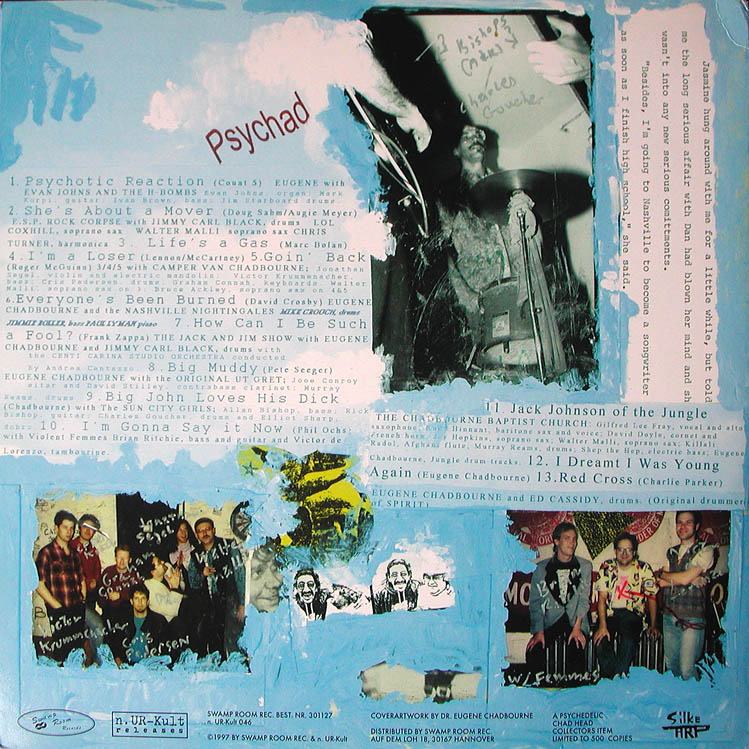 This limited edition vinyl ("a psychedelic Chad Head collectors item limited to 500 copies") was born thanks to the German underground label (with strong psychedelic trend), also responsible for the picture-disc publishing of Young And Innocent Days and Psychadelidoowop .


Chadbourne searches his drawers and feeds on a handful of unreleased tracks alongside excerpts from the albums Sin Funny (" Life's a Gas ", " I'm a Loser" and "Goin 'Back", with Camper Van Chadbourne) Country Music in the World of Islam ( " Big John Loves His Dick " with furious at Sun City Girls) and Hello Recording Club ( "I Dreamt I Was Young Again ", solo). This compilation makes it possible to hear formations unpublished or at least little recorded to my knowledge (while awaiting a hypothetical more complete inventory of tapes ...). Evan Johns and the H Bombs are much more pessimistic than the Psychotic Reaction albums . the too few UT Gret with David Stilley's elephantous bass clarinet, for a " Big Muddy " countryfreefolk probably escaped from the sessions of Time Of The Grets ; a nervous resumption of Phil Ochs in concert "with" the Violent Women (one only hears De Lorenzo tambourine!); The Nashville Nightingales spinning the melancholy pearl of David Crosby (" Everybody has been burned") Spoiled by the heaviness of drummer Michel Crouch; or the Jack and Jim Show defeating Zappa on a bed of syrupy strings ("with the Centi Carina Studio Orchestra conducted by Andrea Centazzo" ???). Doug Sahm's song " She's about a Mover, " a title that will be found later in Texas, is a very british and laugh-free clip Lol Coxhill - who would be dreaming of playing more often with Chadbourne. Session 2 ).


The piece of resistance is the work of the Chadbourne Baptist Church which preaches the spiritual joys of the anarchist brothel and the lustful musical debauchery in the well named " Jack Johnson of The Jungle", Enjoying orchestral confusion around the bass line of the Miles Davis theme, and faithful to the abundance of its so-called electric period.


Finally, this compilation with acid dominance ends with a passage of a radio session of 1996 (cassette " Scaring Off Bassists ") in the company of the former drummer of the group Spirit - Ed Cassidy - awkward jazzman but supporting what it is necessary an improvisation of guitar bebop in devil!