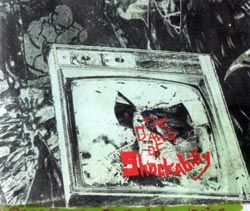 "With rights officially reverting back to Doc Chad, the story of Shockabilly will now be available again in a new series of CD sets. Each one will combine one of the classic Shockabilly releases with superb live material from the same period. For the opening release in the series, the introductory Shockabilly EP The Dawn of Shockabilly is combined with an amazing Halloween recording in which Shockabilly expands to a quartet with the addition of bassist Shep the Hep. A costume contest is part of the action, demonstrating how adept Kramer is at backing up stuff like this on his cheap organ. Longtime Shockabilly buff Hank Gonzalez says "this is the most fun I have ever had listening to Shockabilly."-Eugene Chadbourne