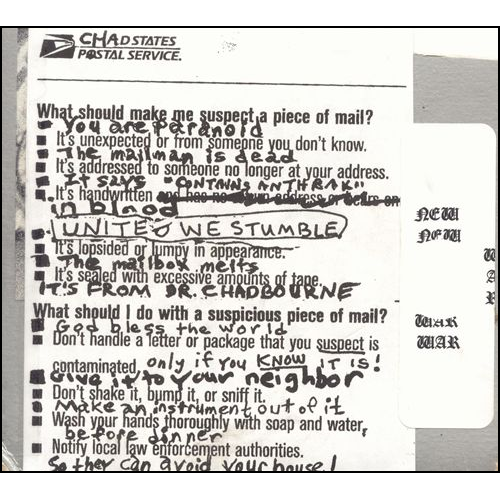 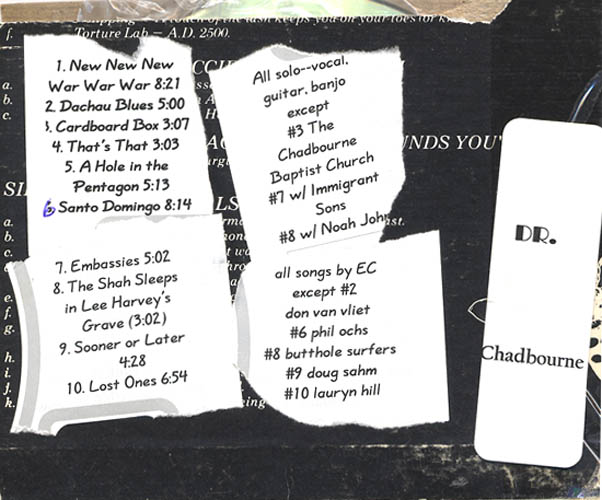 It took Eugene Chadbourne less than three months to write, record, and release an album around the events of September 11, 2001, and the ensuing "war against terrorism." OK, it is not really an album's worth of new material; only five of the ten songs are originals, but the cover tunes have been carefully selected to fit the topic. The Doctor is back on his protest songwriting, and "New New New War War War" addresses about every issue around the U.S. operation in fall 2001, from racism to media manipulation. Its most satirical feature is its cheerful mood, delightfully obscene under the circumstances. "That's That" also hits the spot and takes listeners back to the singer's Reagan-era material. All the tracks are performed solo on guitar and banjo, except for "Cardboard Box" with the Chadbourne Baptist Church (but which incarnation?), "Embassies" with the Immigrant Suns, and a cover of the Butthole Surfers' "The Shah Sleeps in Lee Harvey's Grave" with Noah John. Phil Ochs' "Santo Domingo," Doug Sahm's "Sooner or Later," and Lauryn Hill's "Lost Ones" all take new meaning in Chadbourne's mouth. The sound quality is OK to very good, but this remains a home recording with the usual crude editing the Doctor is known for. Some songs could have simmered a bit more (some parts of "New New New War War War" feel incomplete), but one can easily understand why the artist was hasty about releasing this CD.