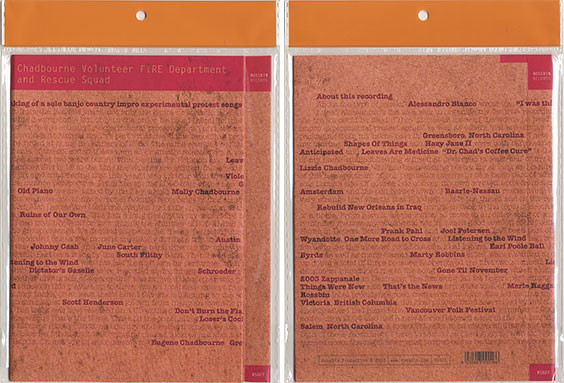 Released 2008 in Italy by Rossbin

The material all comes from the CDs I have been printing and packaging from my home base in Greensboro, North Carolina. These recordings document my live performances, home recording projects and recording sessions that take place in combination with my touring. "Shapes Of Things" and "Hazy Jane II" were both banjo solos I recorded at home in January of 2006. The same sessions resulted in even more tracks on the playlist here: "Sestina for Religion", "Anticipated" and "Leaves Are Medicine". Dr. Chad's Coffee Cure is the name of the collection these were all originally released on, it was an important CD for me because it represented the reopening of my home studio following a fire that destroyed at least half of my house almost two years before. With "Sestina for Religion" and "Leaves Are Medicine" I continué my collaboration with my daughter Lizzie Chadbourne, who has been writing poetry for as long as I can remember. She is 18 at the time these notes are written, these texts come from her high school years.

To communicate the thoughts of this age spectrum of our population seems to be a basic part of what I do, also considering that this year I was on tour with the Violent Femmes, presenting lyrics written by Gordon Gano when he was Lizzie's age. Of course I do convey my own written texts from a more mature perspective. From the spring 2006 tour of the new Get out of Iraq Now (G.O.I.N.) quartet, we have a live track from Amsterdam and the odd border town of Baarle-Nassau respectively. For "Old Piano" we are joined by the 21-year oid Molly Chadbourne now in her 15th year of performing with me. She had purchased a very strange bird whistle that is lodged inside the throat and in the results we have one of my personal favorite recordings of this song, of my entire music for that matter.

"Rebuild New Orleans in Iraq" brings us back to the topic of destruction. Also "Leaves Are Medicine", written by Lizzie in reaction to the house fire; she lost everything she owned as well as her sense of a home. From here it seems logical to move to an older song of mine, "Ruins of Our Own". This has a long history in my repertoire but this version was recorded only recently, when a fan of mine reminded me that my catalog did not include a good version of this song. I had My 4a off on tour during the summer of 2004. I had just finished two nights at the newly restored Bohemian National Home in Detroit. Both Frank Pahl and Joel Petersen had been part of the group onstage. We decided to spend the cheesy patriotic American holiday recording protest songs in Frank's home studio in Wyandotte.

"One More Road to Cross" and "Listening to the Wind" had been recorded only a few months previously during a trip to Austin., Texas. Harmonica player Walter Daniels had hatched a scheme for us to get the most we could out of a local legend, Earl Poole Ball. He was Johnny Cash and June Carter's band director for many years, played piano on the Sweetheart of the Rodeo album by the Byrds as well as many classic Marty Robbins sides. Walter wanted to overdub Earl on a track by the South Filthy band. Then I was allowed to track two songs with him as part of the session. We ended up doing a total of three because Earl enjoyed the first two so much: "Listening to the Wind" was this last "bonus" side he performed with no additional payment required.

At least one, maybe more of my daughters introduced me to the song "Gone Til November" which along with Dictator's Gazelle were recorded at drummer Schroeder's home studio in Freiburg, Germany. Schroeder I had met at the 2003 Zappanale in East Gennany. The following fall we began performing together and much of a recording session we did together was part of a CD entitled Stoned for the Future.

"Wishin' all these Old Things Were New" and "That's the News" bring the total of Merle Haggard tunes on this playlist up to three: not an intended concept from the outset but a simple result of Alessandro's instructions. The Rossbin label presidente's road map seems to have also led us into the honky tonks, or at least that's how I felt when listening to the songs in sequence.

For the first of these songs we are in a bar in Victoria, British Columbia, the local pick-up band assembled by multi instrumentalist Scott Henderson known from many an avant or post rock project-but not the fusion guitarist! This gig took place shortly after I had played the Vancouver Folk Festival, summer of 2002. The track was first released on a CD entitled Don't Burn the Flag, Let's Burn the Bush. The Chadbourne Baptist Church quartet active circa 2004 also had a new Merle Haggard song in the set list, the marvelous "That's the News". This and the concluding "Loser's Cocktail" were recorded at a cozy bar called The Garage in Winston-Salem, North Carolina, a location I refer to in my vocal. This song was a hit for a mostly forgotten country and western singer, by the way: Dick Curless. Someone in the audience was responsible for both of these recordings. I have to admit I stopped gigging with this group because I thought it was bringing me bad luck, as just about anything associated with a church very well might. Our house had burned down the night after what turned out to be the last Chadbourne Baptist Church gig in my hometown."
-Eugene Chadbourne